ALLEGHENY STRING QUARTET
​Genaro Medina, Jeremy Klapper, violins, Lela Tsinadze, viola, Kim Cook, cello
Genaro Medina began studying music and the violin in his native country, Venezuela, under world-famous orchestral music program phenomenon “El Sistema.” He completed conservatory studies with honors under the guidance of violin Professor Eugene Weiss. His orchestral career started at age 15, when he became a member of the first violin section of the Carabobo State Symphony Orchestra. He also became a member of The Ibero-American Orchestra, touring throughout the Americas. He gave solo recitals in various cities and performed as soloist with symphony orchestras, including the Valencia Youth Orchestra, the Carabobo Symphony Orchestra and the San Carlos Symphony. He earned bachelor’s and master’s degrees from Duquesne University and performed with the Pennsylvania Philharmonic Orchestra, the Lancaster Symphony Orchestra, the Duquesne University Symphony Orchestra and chamber orchestras in Europe and the United States.

A native of Ohio, Jeremy Klapper studied violin performance at the Cleveland Institute of Music, Ohio State University, Aspen Music Festival and Meadowmount School of Music. His teachers include David Cerone, Michael Davis, Kurt Sassmannshaus, Yair Kless, Aaron Rosand, and Edward Lawrence. He is a former member of the Florida Symphony and the Houston Symphony, and participated in concert tours of Europe and Asia with the latter ensemble. More recently he has appeared in solo and chamber music recitals across the US and in Germany, and currently plays with the Altoona Symphony. Dr. Klapper is also a graduate of the University of Cincinnati College of Medicine, and is a practicing pathologist at UPMC Altoona.

Violinist and violist Lela Tsinadze has enjoyed a prolific music career in the US and abroad as a performer and a pedagogue. Lela has performed with The Tbilisi State Symphony Orchestra in the Republic of Georgia, The Baton Rouge Symphony, The Pensacola Symphony Orchestra in Florida, The Saint Louis New Opera Orchestra in Missouri, the Lancaster Symphony Orchestra, The Philadelphia Pops Orchestra and Philadelphia Virtuosi Chamber Orchestra. Ms. Tsinadze is the assistant concertmaster of the Altoona Symphony.   Lela holds a Bachelor’s degree from the Tbilisi Conservatory in the Republic of Georgia and a Masters degree in both violin and viola from the Louisiana State University. She has won concerto competitions in the Republic of Georgia and in the United States.  In addition, she currently teaches strings at a studio she maintains with her husband, Genaro Medina.

​Cellist Kim Cook has performed as a soloist in Europe, Russia, China, Israel, Jordan, Latin America and throughout the United States. As International Artistic Ambassador for the U.S. State Department, she toured extensively.  She has recorded concertos by Shostakovich, Tchaikovsky, Dvorak, Lalo, Saint-Saëns and Haydn, solo sonatas of Kodaly, Crumb, and Hindemith, and works by Paul Reale for NAXOS. Cook has degrees from Yale and the University of Illinois, and has worked with Gabriel Magyar, Alan Harris and Aldo Parisot.  At Penn State, she was awarded the Faculty Scholar Medal, served as the inaugural Penn State Laureate, and is Distinguished Professor of Music.
​
​ The Allegheny String Quartet has performed  on the Sunderman Memorial Concert Series at  Trinity Lutheran in Altoona, and on the Unitarian Universalist Fellowship Music Series in State College, PA 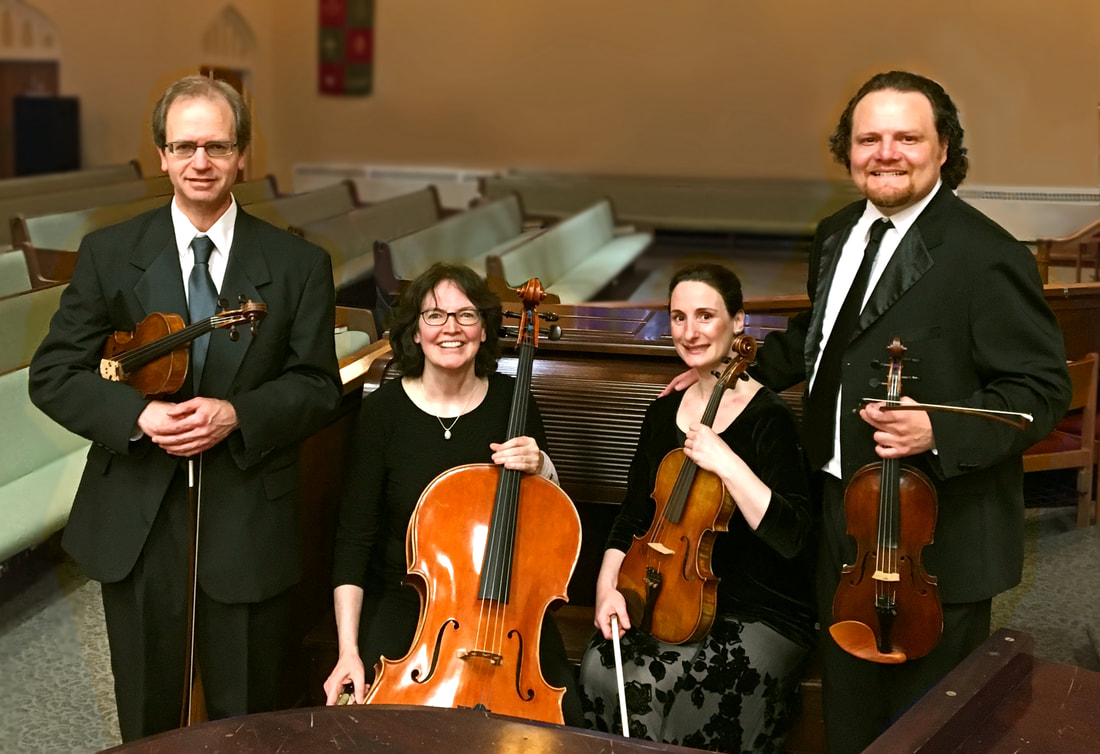